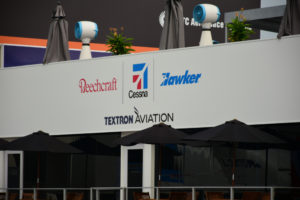 After initially suspending the Cessna Hemisphere in April 2018, there was speculation that Textron may cancel the program altogether. However, Textron Aviation has reported that the project has simply been put on hold. Textron Aviation CEO Scott Donnelly cited manufacturer delays and engine performance concerns as the chief reason for suspension. The Cessna Hemisphere remains in the realm of ‘what could be’ as it has been touted as the next big winner in the category of large-cabin jets.

The early indicators of a market leader

Announced in 2015 at the National Business Aviation Association (NBAA) conference, the Cessna Hemisphere was set to be a triumphant return to the skies for bigger Cessna jets after canceling its anticipated Columbus six years prior. It was well received and much anticipated, boasting the widest cabin in its class and seating for 19.

Behind plenty of industry hype, Textron announced a partnership with engine maker Safran in 2016, pledging to outfit its jets with the company’s new Silvercrest engines. But these engines would eventually become its undoing.

At the time the partnership was announced, Safran’s Silvercrest engines were still in development. As final designs were mounted on the airframe, problems began to take shape.

Initially, the Silvercrest engines responded poorly to commands during high-altitude tests. Then, issues with pressure losses exacerbated engine performance over extended ranges. Safran made modifications, but to no avail. Ground tests continued to show performance issues in key areas like fuel economy ― a must-win column for Textron.

Ultimately, Textron decided to terminate its partnership with Safran in 2018. Textron CEO Scott Donnelly points to engine inadequacy as the sole reason for parting ways, claiming “it was purely the engine.” The Silvercrest engine failed to meet key performance benchmarks that would’ve set the Hemisphere apart as a standalone competitor in the large-cabin class. Larger engines, like the PW800 commonly used on bigger airframes, weren’t an option due to issues with fuel economy. Without the Silvercrest engine, Textron put the Hemisphere on hold.

Is there more to the story?

The failure of the Silvercrest engine to perform to Textron’s standards is a cut-and-dry reason to suspend the project. But the staunchness of those performance standards may have a bigger backstory.

Textron is well known for its small and midsize jets. The Hemisphere would’ve been its first major foray into a competitive large-cabin jet, which would’ve immediately put it in the ring with the likes of Gulfstream, Dassault, and Bombardier. Without the ability to trump established large-cabin jets on metrics like fuel economy and range, the Hemisphere may have fallen flat in this new category.

Knowing this, Textron was banking on the innovations of the Silvercrest engine to power it past the competition. When it failed, Textron had no choice but to put the project on hold.

Is there a Hemisphere in the future?

This isn’t the first time engine troubles halted a private aircraft in development. The Dassault Falcon 5X fell to the same type of problems in 2017 ― also banking on the Silvercrest engine. Despite the failings of the Falcon 5X, the Falcon 6X is scheduled to fly in 2021. Is this what the future has in store for the Hemisphere?

It’s unclear. Textron’s focus continues to be on small and medium-sized cabins. However, Donnelly commented recently that the program could be revisited given the state of the market, competitive landscape, and of course, proven engine performance. In the meantime, Textron is likely to focus on its other pipeline projects: The Cessna Citation Longitude business jet, Cessna Denali turboprop, and the Cessna SkyCourier (fleet).

The expert jet brokers at L & L International are here to help you acquire the perfect jet. Need to sell your jet? We can assist with that, too. Contact the private aviation professionals for information on how to get started.