Tag: 5 Most Expensive Private Jets in the World

The Boeing 757 is a midsize airliner known to pilots as “the Ferrari of commercial jets.” Despite being a commercial aircraft, a Boeing 757 is Trump’s personal jet. Trump bought the jet from Microsoft CEO Paul Allen in 2011 for $100 million, a good price for an aircraft model that at the time was 20 years old. The interior was refurbished to fit 43 people, down from the original 180 to 200 passengers. Trump’s jet can fly for 16 hours and reach a speed of 500 miles per hour.

Speaking of Trump, he currently flies in the second most-expensive aircraft in the world, Air Force One, whose security features make its value $660 million. When Trump was elected, he stated he would prefer to fly in his own jet — but federal officials deemed it nearly impossible to retrofit the jet with the necessary security features.

The ACJ, or Airbus Corporate Jet, is the business version of the Airbus A319neo. The $101.5 million price tag is before customization. It boasts the widest and tallest cabin of any corporate jet. The jet is capable of long-range flight from Los Angeles to Geneva. It also offers a lower cabin altitude of 6,400 feet, making passengers more comfortable. Its key feature is the sky ceiling which displays a live view of the sky, or other images.

In 2016, Chinese conglomerate company HNA Group spent $100 million turning the $224 million Boeing 747 into a private jet. This aircraft was the first Boeing Dreamliner purposely built as a private jet, so its interior and fittings were custom made. The interior is 2,400 square feet and includes a master suite with a California king bed, a walk-in closet, and a double-size shower. The BBJ — or Boeing Business Jet — fits up to 40 passengers.

Another custom 747, the VIP is the longest and second largest airliner ever made — earning the nickname “Queen of the Skies.” The price tag is $403 million before adding luxury amenities. The interior is 4,786 square feet and features a stateroom, lounges, an office, and a dining room. It can fly 8,000 nautical miles nonstop. The aircraft’s owner remains anonymous. 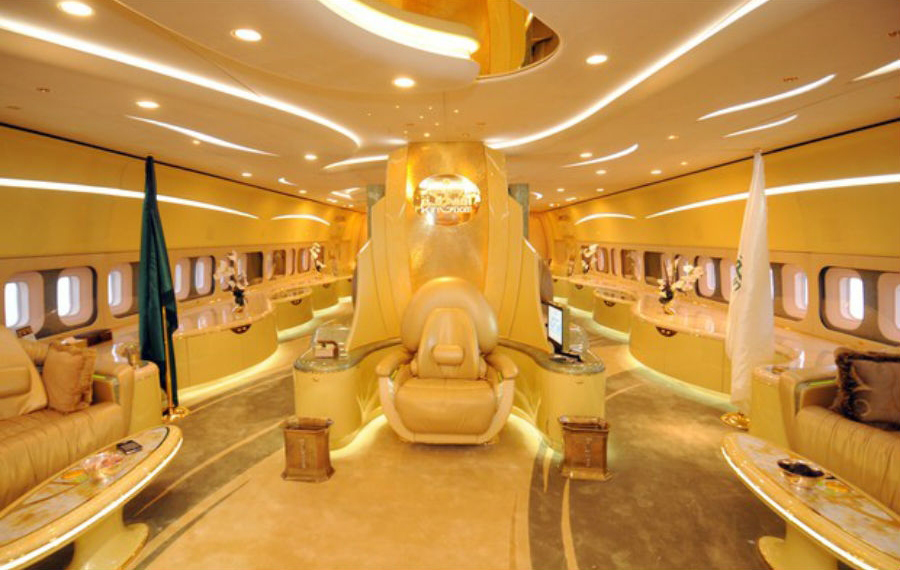 The Airbus 380 is the world’s biggest and most expensive private jet. Saudi Prince Al-Waleed bin Talal al-Saud customized the triple-decker commercial airliner to include a stable, a garage, and a prayer room that rotates to always face Mecca. Additional luxuries include a Turkish bath and a concert hall with a grand piano. Many airports have had to update their facilities to accommodate this aircraft, which is the world’s largest commercial airliner.