We’ve been musing about the “Future Falcon” from Dassault for the better part of two years. Ever since the Falcon 5X was cancelled in 2017 and reinvented as the Falcon 6X in 2020, there has been a “shadow jet” lurking within the subtext. Speculation has run high about what Dassault has kept under wraps.

Now, we know it’s a super-sophisticated luxury jet, meant to compete “at the very top of the pyramid,” according to aircraft consultant Rolland Vincent in an interview with Bloomberg. It’s an exciting prospect that we’ll soon learn more about, when it’s formally announced.

A jet to compete at the highest levels

As rumors surrounding the “Future Falcon” continue to swirl throughout the aviation industry, Dassault has been tight-lipped about their next entry in the corporate jet market. While Dassault executives have offered no concrete specifics regarding their new model, aviation insiders are starting to get a clearer picture of what to expect from this new ultra-luxury business jet. Once deliveries of the new aircraft begin in 2025, buyers can expect a jet that matches or exceeds rival models in size, speed, and range.

Dassault is making innovations in the face of stiff competition from heritage brands, including Gulfstream and Bombardier.

Gulfstream plans to deliver its latest entry in the luxury business jet market, the G700, in 2022. Expected to be the flagship of the brand, the new model will focus on corporate travel, to offer more speed, lower operating costs, and a more comfortable ride. Gulfstream has raised the bar for cabin innovation and customization — the new Dassault entry will take cues from the G700 and push the innovations further to stand out in the market.

Meanwhile, Bombardier has already distinguished itself as the industry leader when it comes to large, purpose-built business aircraft. The Global 7500 has redefined the business jet market, featuring the industry’s most advanced flight deck with enhanced and synthetic vision for increased situational awareness. On top of many safety innovations, the model boasts the longest range and the smoothest ride, making it a very attractive option for high-dollar customers looking for the ultimate in private travel luxury.

Dassault’s next entry in the market will answer these innovations, to compete toe-to-toe with the current industry leaders. 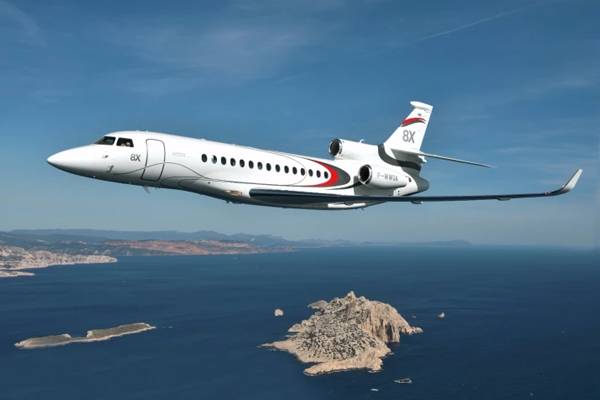 An air of mystery still persists

We won’t truly know what Dassault’s “Future Falcon” has to offer until the company officially unveils the new model. What’s certain is that aviation enthusiasts can expect revolutionary upgrades. Dassault has a very healthy $600M budget for R&D, expected to translate into never-before-seen innovations that will set the model apart from its rivals. The new entry won’t just be a better Falcon 6X — it’ll be a totally unique jet, expected to set the standard for the luxury business jet market.

When will wraps finally come off the “Future Falcon”? The company has repeatedly hinted at an introduction “sometime in the first half of 2021,” which means the clock is ticking on an unveiling. What’s the holdup? Reports claim that the company is pushing for a live, in-person event post-pandemic, to generate even stronger buzz behind its new jet. If that’s not possible, Dassault will take cues from virtual events, including its own highly successful Falcon 6X virtual event in late 2020.