In private aviation, the ability to set records distinguishes an aircraft from its competition. But with Rolls-Royce’s new Spirit of Innovation electric craft, records are less about beating the competition and more about charting the course toward an EV future. The famed engine maker’s latest record-setting feat spotlights the potential for light electric aircraft and their ability to zip from city to city. It’s an exciting prospect for an emerging industry — one garnering a lot of attention in recent years.

Meet the Spirit of Innovation

The aptly named Spirit of Innovation represents Rolls-Royce’s commitment to the third age of aviation: net-zero electric aircraft. The craft was designed to showcase the phenomenal potential of an all-electric craft — and to mark it as a contender in the emerging sustainable fuels market.

Armed with an astounding 550 horsepower, the Spirit of Innovation shattered the existing speed record for an all-electric aircraft. In fact, the craft set three unique records in a single test flight. Its 387.4 mph speed beats the previous record of 213 mph, held by a Siemens-powered Extra 330LE. The craft also set a record for fastest time to a 3,000-meter (9,843 feet) altitude at 202 seconds and another for fastest average speed at 345.5 mph.

And the Spirit of Innovation did it all with zero emissions.

Designed to showcase the future

The Spirit of Innovation is a collaborative effort to establish the framework for an all-electric fleet of light jets in the future. The current iteration is breaking records because of its innovative fuselage, powerful motor, and a cutting-edge battery design.

The craft’s 550 horsepower comes from its 400 kW, 750-volt motor — now a certified proof of concept for effective battery-powered propulsion. According to Rolls-Royce, it’s backed by the most power-dense propulsion battery pack ever assembled in the aviation sector — featuring some 6,480 cells.

EVs aren’t novel in aviation, but speed has not traditionally been their strong suit. While many airframe makers and aviation startups are banking on EV potential for regional or intercity trips, the Spirit of Innovation is the first to illustrate their potential for displacing regional jets as a form of rapid transportation.

Rolls-Royce’s Accelerating the Electrification of Flight (ACCEL) program has been exploring this niche for several years in collaboration with the UK government and the Aerospace Technology Institute. The goal isn’t just to make EVs a viable solution for regional flight — it’s to eliminate the harmful emissions associated with these trips. The Spirit of Innovation’s speed records demonstrate the possibility of zero-emission, regional runs at speed. 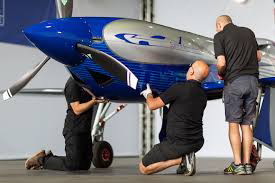 The Spirit of Innovation may not look like the future of regional EVs, but this “tail-dragger” has proven speed and net-zero emissions can exist in a single craft. It’s data Rolls-Royce’s ACCEL program will take back to the drawing board as it seeks to design crafts to rival today’s regional jets. Make no mistake: The third age of aviation is here, and these records won’t be the last ones broken by a carbon-neutral EV.

Critics of private aviation often cite the high emissions of business jets as a catalyst for climate effects. And although there have been innovations in the form of sustainable aviation fuels (SAF), most legacy jets are capped at certain low levels of SAF. Until now. Famed aviation engine maker Rolls Royce has reported a highly successful test run of its new Pearl 700 engine, using 100% SAF. It’s a critical milestone to a more sustainable future for private aviation.

On February 1, 2021, Rolls Royce reported promising results from the first tests of 100% SAF in a business jet engine. This test represents the trend in the industry toward reducing carbon emissions, with a goal to reach net zero carbon by 2050. Researchers tested the Rolls Royce Pearl 700 engine and saw very promising results that could lead to eventual fuel certification and greener air travel.

The main driver of the current level of interest in these fuels is their ability to significantly reduce carbon emissions of jet engines. SAF has a much higher energy density than regular fuel, dramatically increasing engine efficiency. The result is higher payload conditions or extended range, which is critically important for business jets traversing the globe.

SAF can reduce CO2 lifecycle emissions by more than 75 percent compared to the conventional jet fuel it replaces. It’s clear that SAF plays an important role when it comes to reducing the aviation industry’s overall impact on the environment.

Even when taking the major environmental benefits of SAF into account, there are reasons private jet owners aren’t ditching conventional fuel for a greener option. Unfortunately, legacy engines can’t handle 100% SAF fuels — yet.

Many legacy jets can’t support SAF blends above 50%. They’re only able to recognize the SAF as “fuel” if it’s nearly identical in chemical composition to regular petroleum-based options. That’s just not possible yet with 100% SAF. While using any amount of SAF fuels is great for the environment, the aviation industry needs to get to a point where 100% SAF becomes the norm.

The Rolls Royce Pearl 700 engine represents the next great hope for sustainable air travel. It’s a highly efficient engine that combines the Advance2 engine core with a new low-pressure system. Extensive testing shows that this engine is able to perform extremely well while using 100% SAF. Researchers saw a marked increase in take-off thrust, as well as an improved thrust-to-weight ratio.

With such promising performance, the Rolls Royce Pearl 700 demonstrates the possibilities of using 100% SAF as a full “drop-in” option. In other words, a complete replacement of petroleum-based fuels.

Although more testing is required, aviation insiders are seeing the possibilities of environmentally friendly jet travel once this fuel is fully certified.

The expert jet brokers at L & L International are here to help you acquire the perfect jet.  Need to sell your jet? We can assist with that, too. Contact the private aviation professionals online, at sales@L-Lint.com, or at +1 (305) 754-3313.